If you are looking to buy or sell and original Don O'Neill painting we have some options for you.  We work closely with Lee's Framing in Riverside, California and our original art is sold directly through them.  The prices and availability of these pieces are subject to change.  Please call Lee's Framing directly for more information.  All paintings are pick up only and will not be shipped. If you have an original painting you would like to sell please contact us.  We would be more than happy to find a new home for your piece.  Lee's Framing and Gallery 7001 Indiana Ave. Ste.1, Riverside, CA 92506 (951) 787-1810 www.leesframing.com 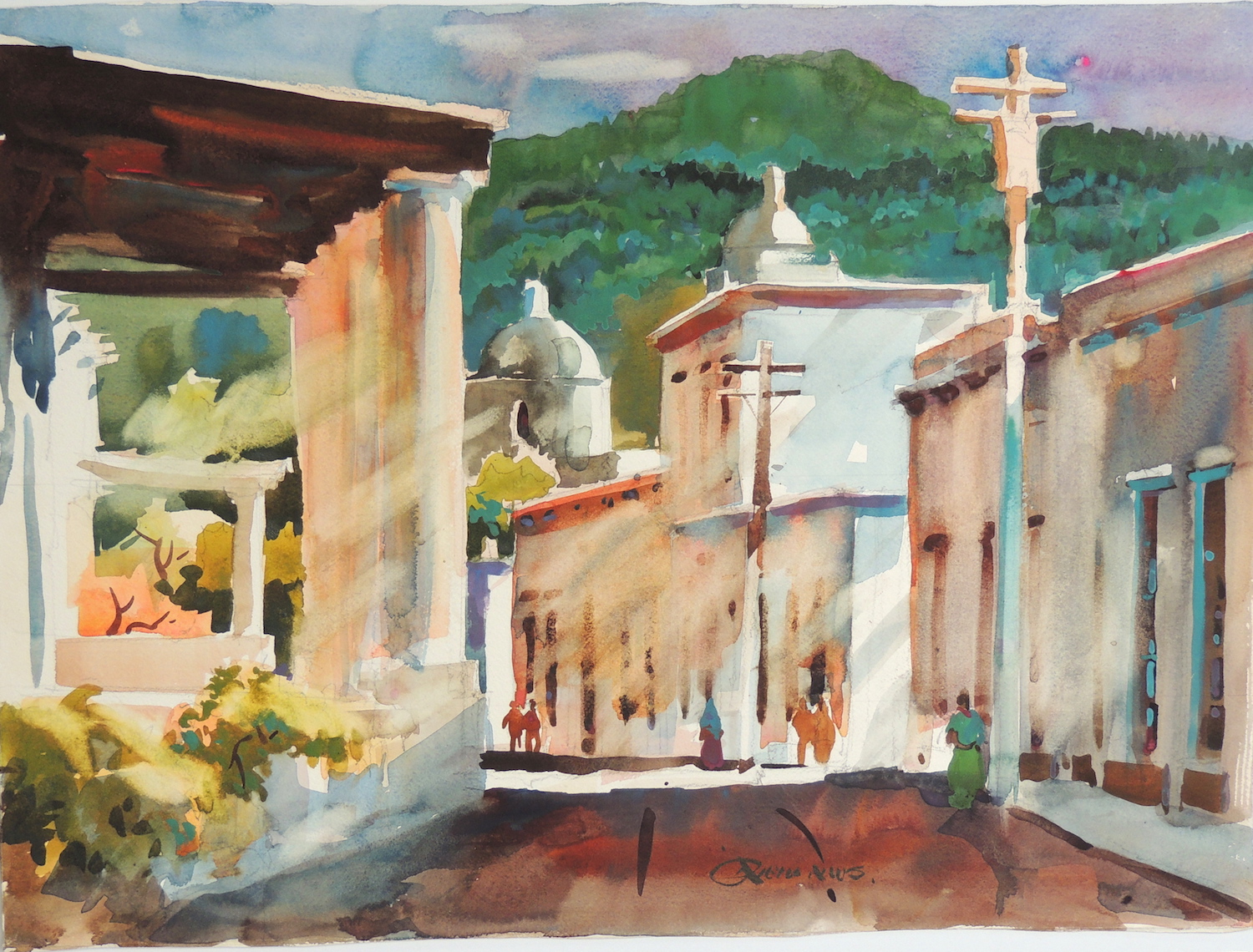 Alamos Morning.  This beautiful watercolor was painted at some point in the late 1980’s or 1990 during Don’s tenure with the National Watercolor Society (NWS) and was acquired by another local artist in 1990.  The scene is likely Alamos, Sonora, Mexico.  Mexico was one of Don’s favorite travel destination and a place he was artist in residence in Chiapas in 1989.   This particular painting is a vibrant example of Don’s Latin American work and would make a fine addition to your art collection.  The measurements are approximately 17”x22.5”.  This painting is unframed. SOLD! 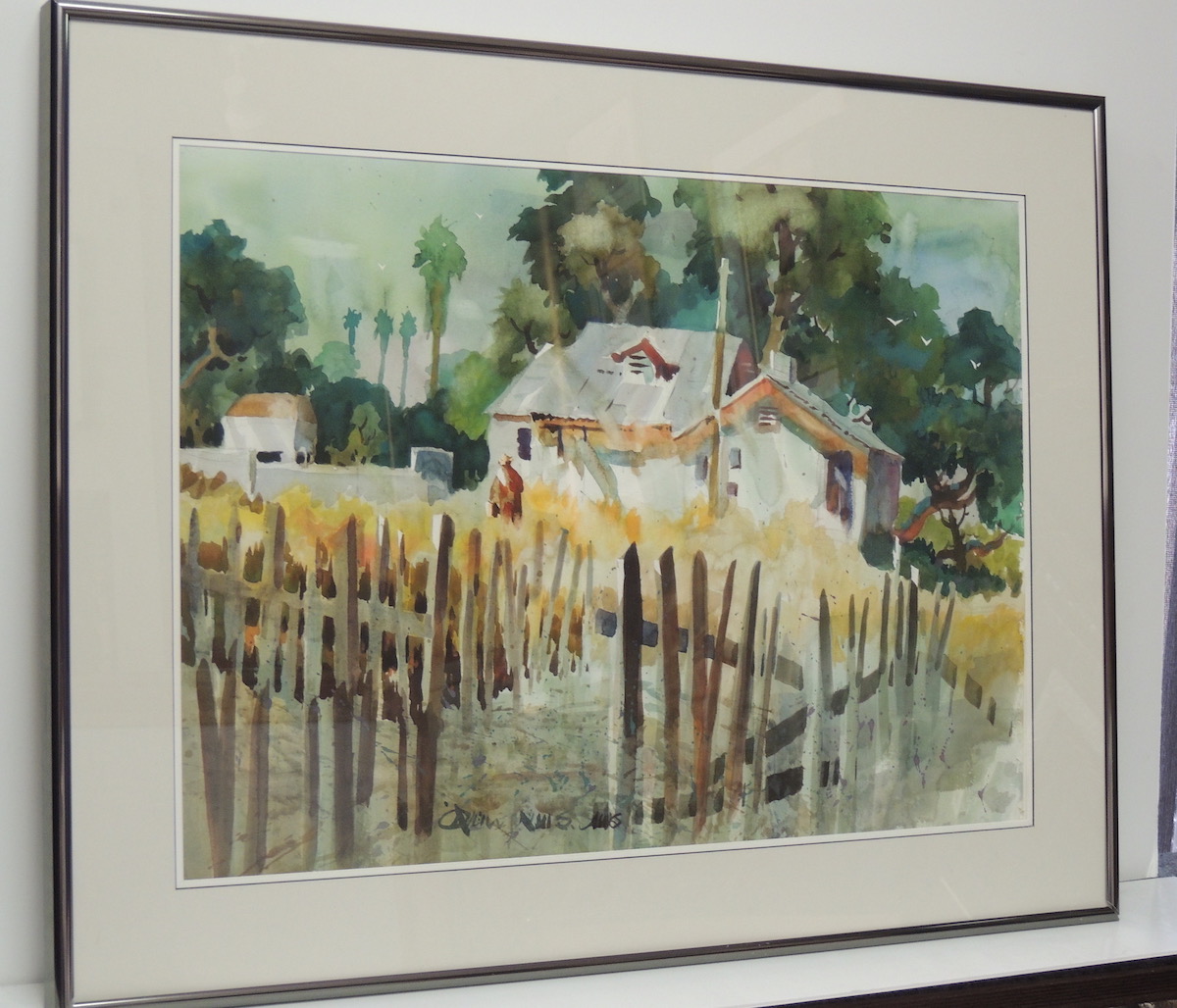 Riverside County Old Dairy.  This is a beautiful example of Don’s painting of one of our more rural scenes.   Don would have painted this watercolor during his tenure with the National Watercolor Society, however as evidenced by the second AWS tagline he likely worked on it again years later, highlighting various parts of it making it a very special painting to have both guild signatures on it.  Only a small handful of paintings were given this special treatment and bear both the NWS and AWS memberships.  The price is $1800. 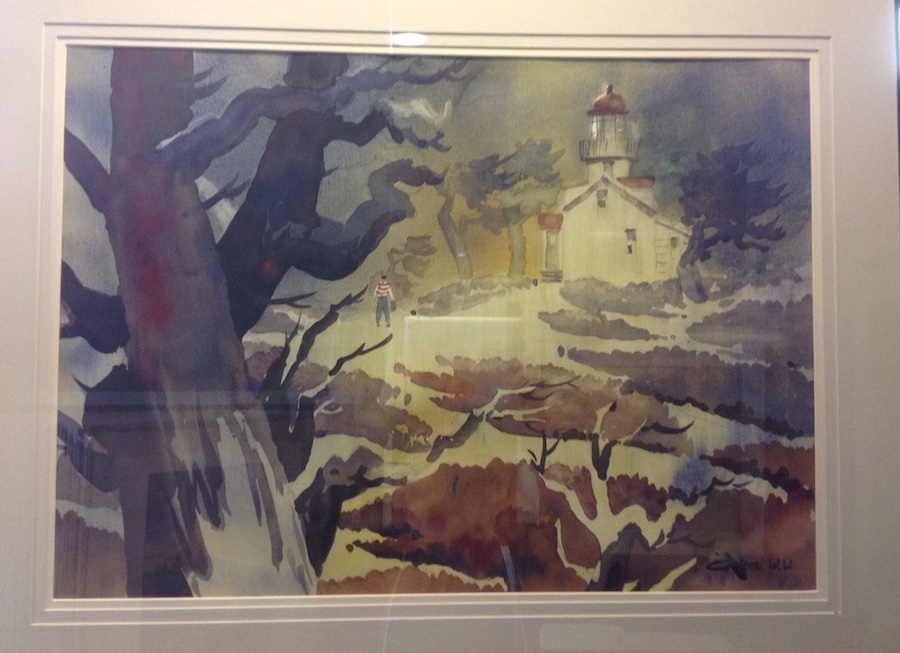 Lighthouse at Pacific Grove, CA.  This painting was finished at some point in the early 1980s and makes excellent use of negative shapes with the trees in the foreground.  The price $1000. 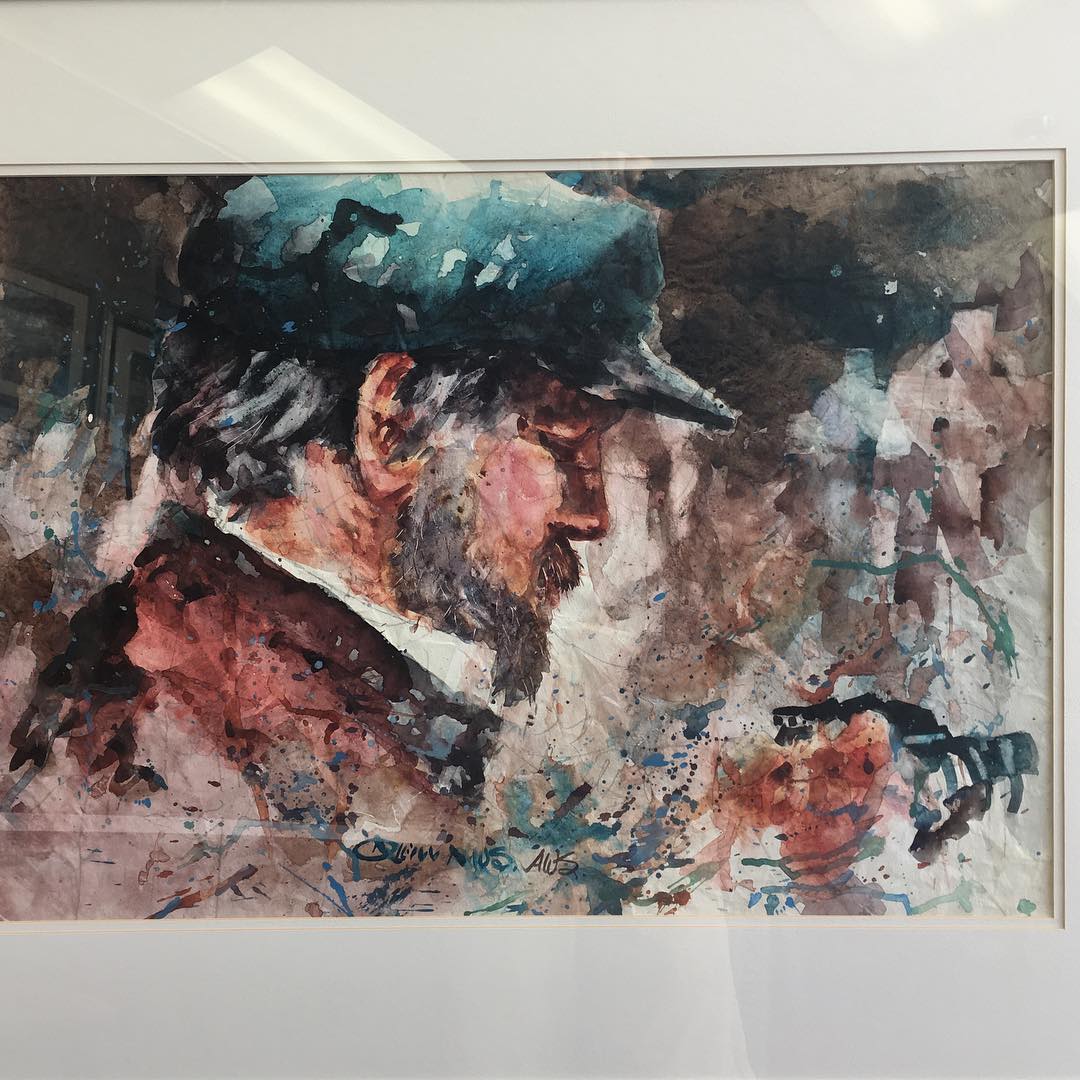 Unnamed Self Portrait Don painted very few portraits throughout his career and very few self portraits.  This is one of those examples and thus making it a very special piece.  This painting has both the NWS and AWS signatures.  This was something Don would do when he would take older paintings and then touch them up later in his career.  The price is $3000. 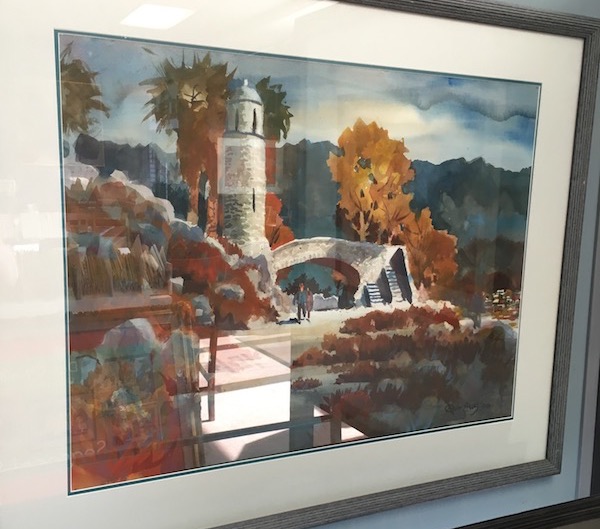 Peace Tower, Mt. Rubidoux, Riverside, California. This is the original painting that is the source for our Peace Tower giclee print. It was one of the final paintings Don painted in his career in 2006. Don painted this particular scene numerous times and from what we understand this was the the final version of it. Don painted only a few paintings the last few years of his life so this is a very special painting. SOLD. 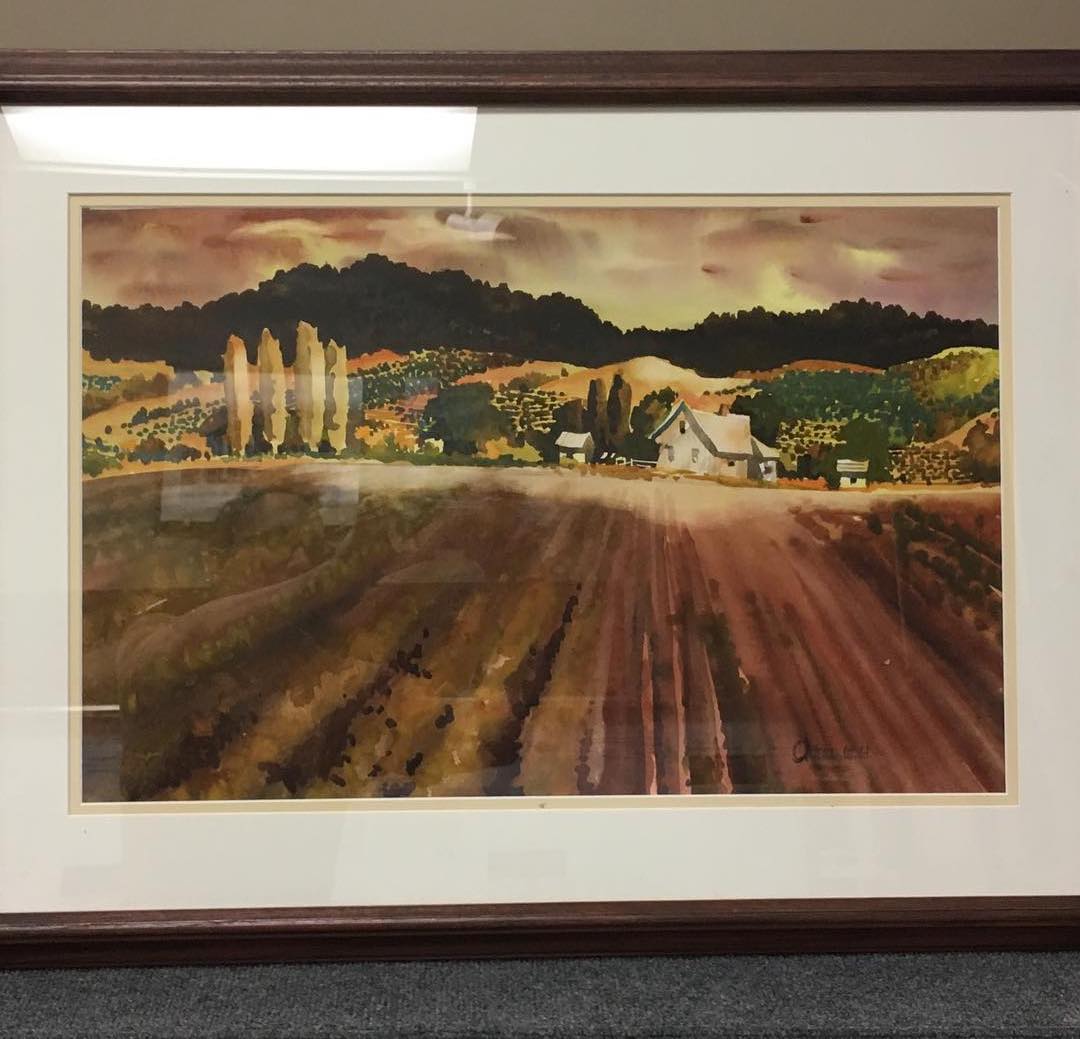 California Countryside - Don did not label exactly where this is, by the looks of it this painting could be in any number of farmlands of California.  It was painted during his tenure with the Watercolor West in the 1980s and is a beautiful example of his work from this era. SOLD!! 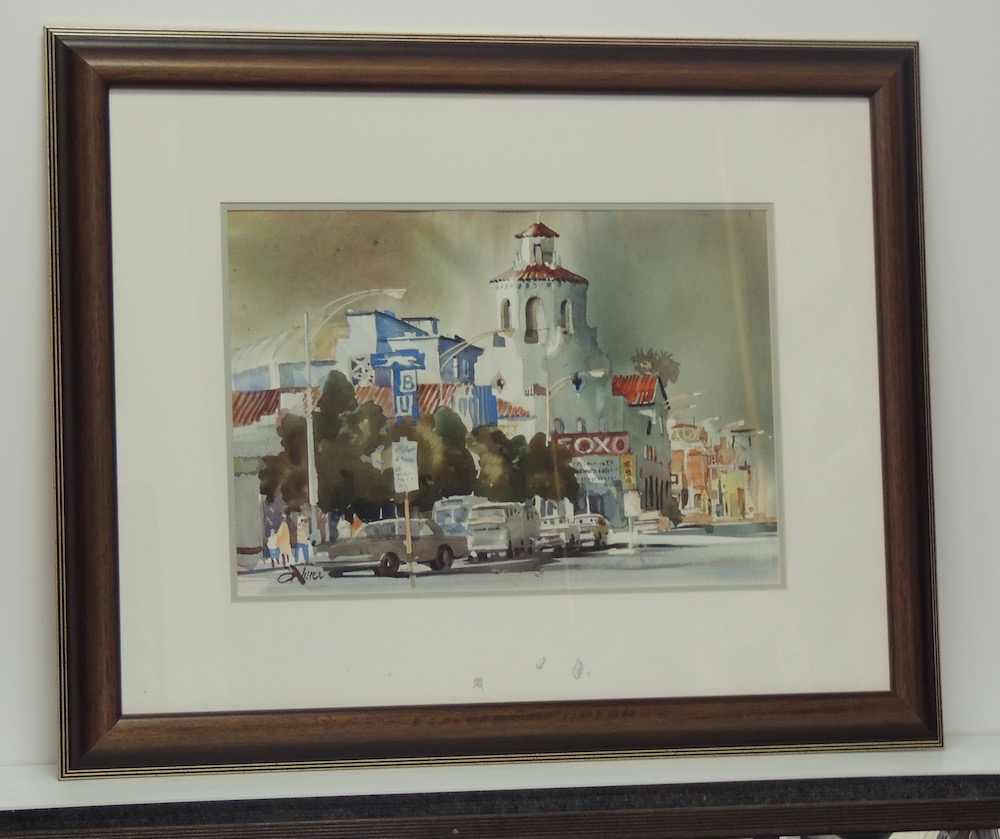 Hazy Day at the Fox Theater.  Don would have painted this piece either during the late 1970's or early 1980's.  Many of the buildings in this painting have lone been torn down and this painting showcases Riverside's past.  SOLD!! 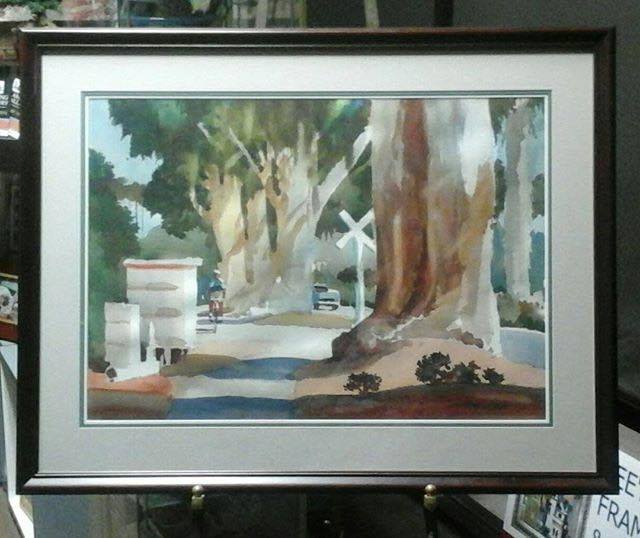 Victoria Bike Path.  This painting was most likely done during some point in the 1990s as it has Don's AWS tagline.  SOLD!! 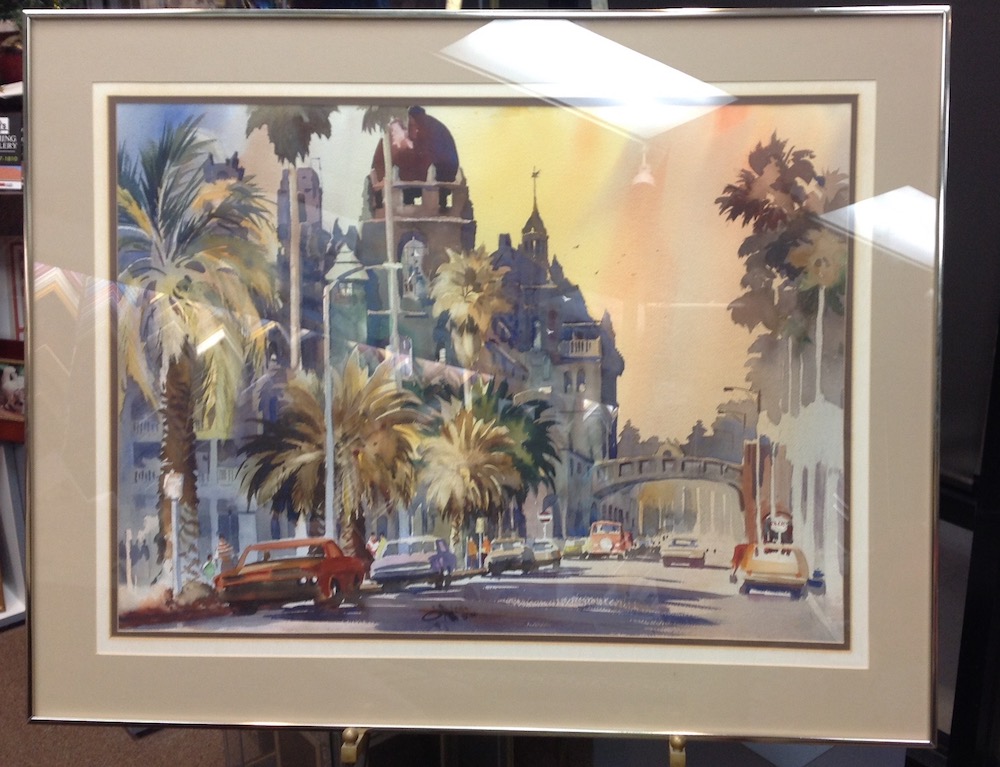 Mission Inn view of Sixth Street.  This is one of the most beautiful examples of Don's work of the Mission Inn.  The view down 6th street showcases an iconic view of Riverside that has remained mostly unchanged for decades.  SOLD!! 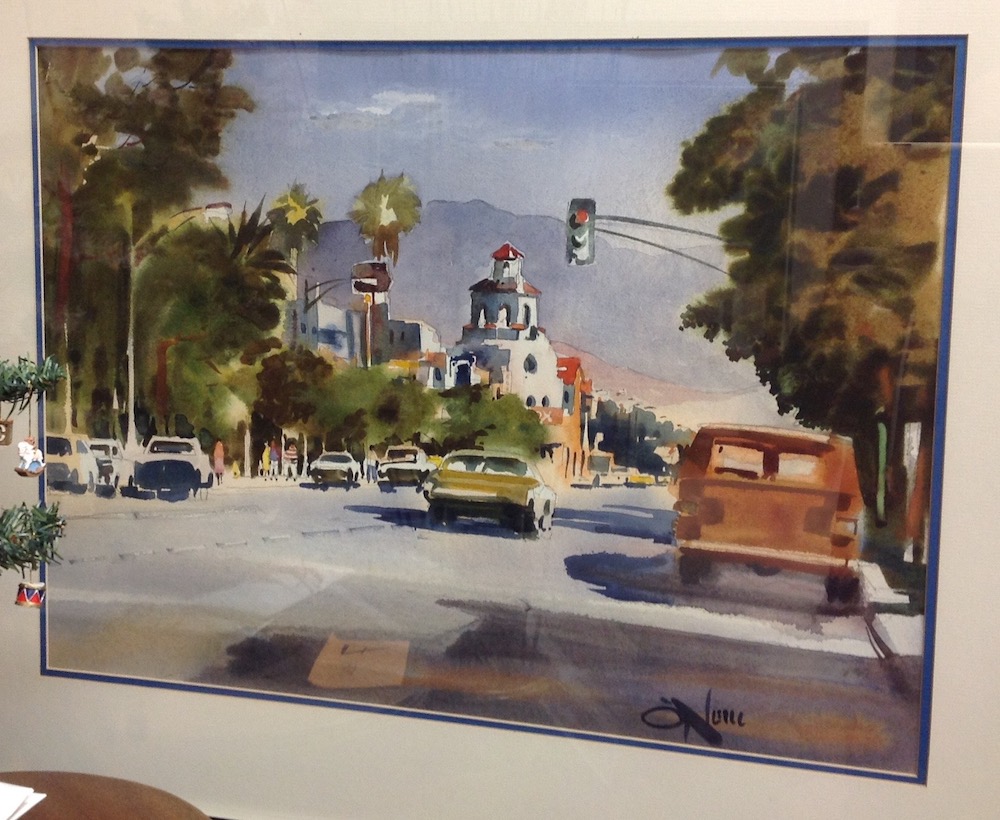 The Fox Theater as seen down Market Street, Riverside, CA.  This painting showcases an iconic view of Riverside before it was full of the tall buildings that now occupy the skyline.  SOLD!! 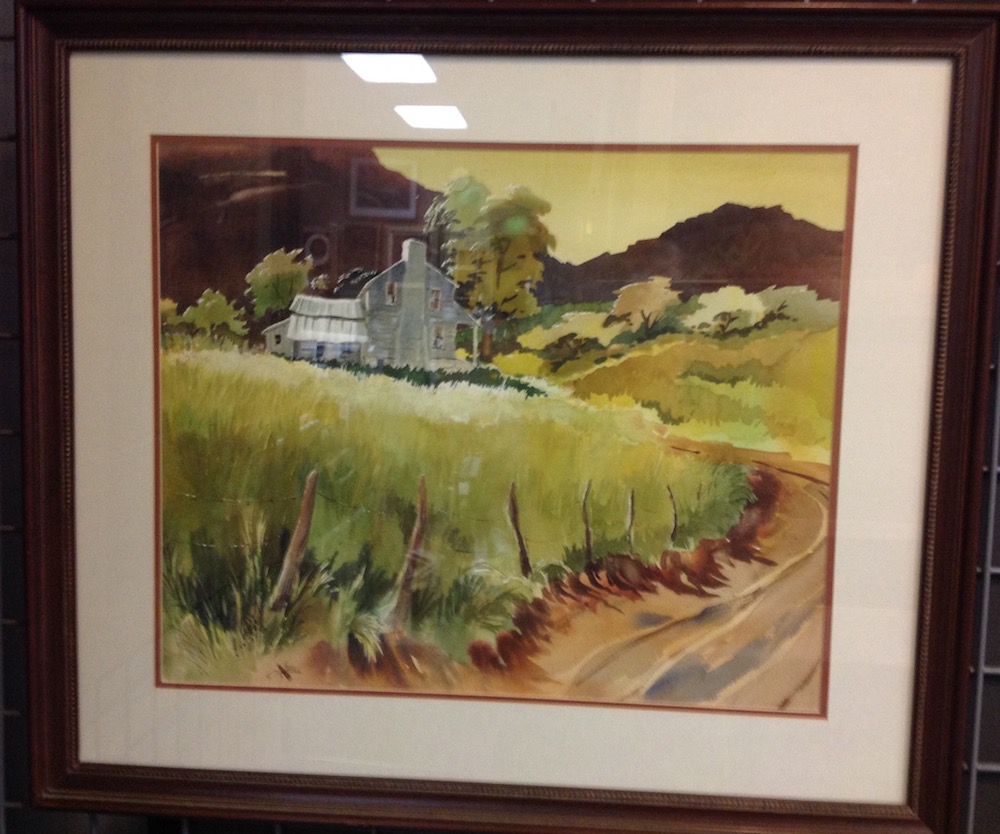 Vintage Countryside.  This painting was created early in Don's professional career and we are not exactly sure the location of the scene.  We think the scene depicted is somewhere in an agricultural region of California.    However it is a beautiful representation of a vintage country lifestyle.  SOLD!! 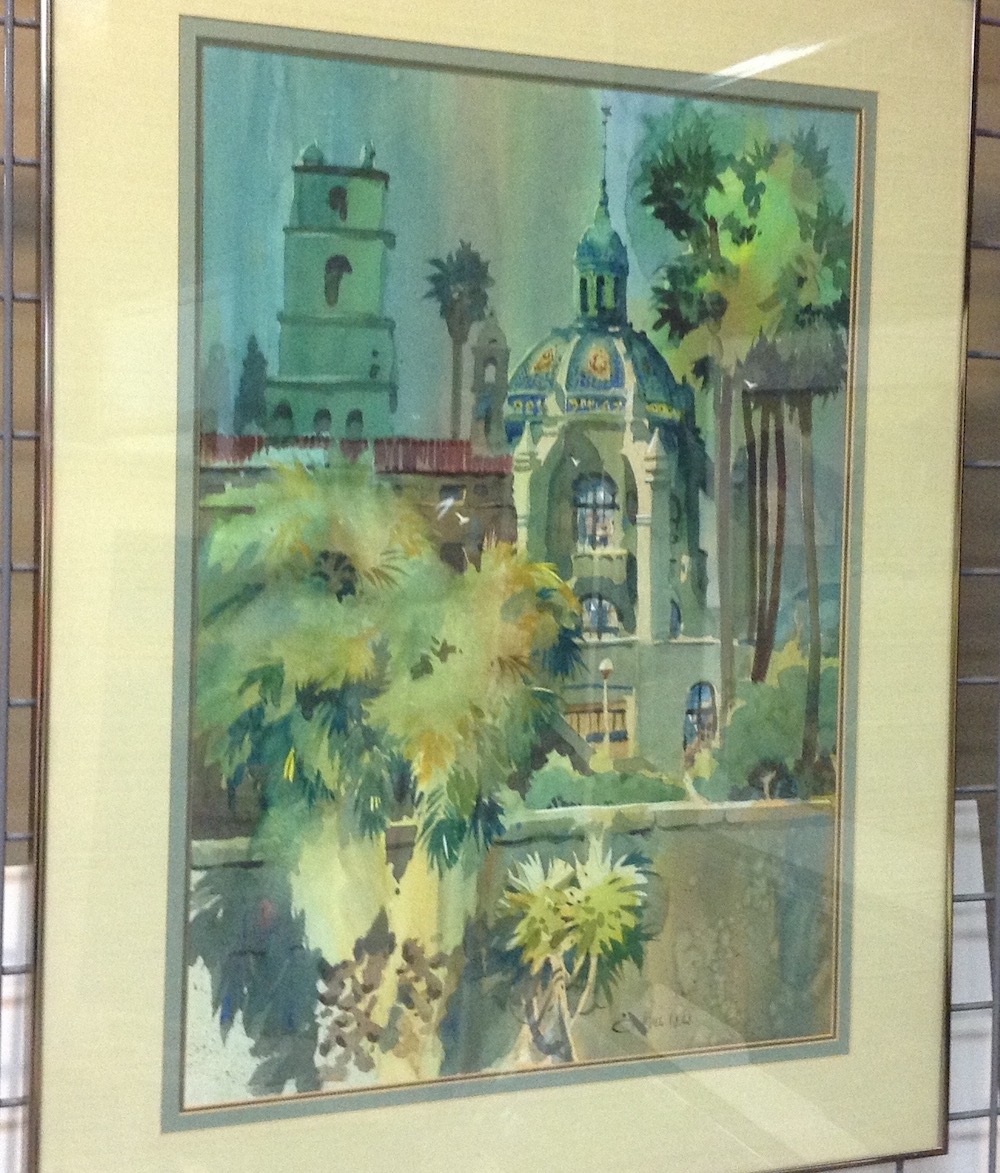 Mission Inn as seen from Riverside Convention Center.  This painting is a from Don's Watercolor West era and he depicts the Mission Inn with an almost tropical feeling using green tints over the majority of the painting.  SOLD!! 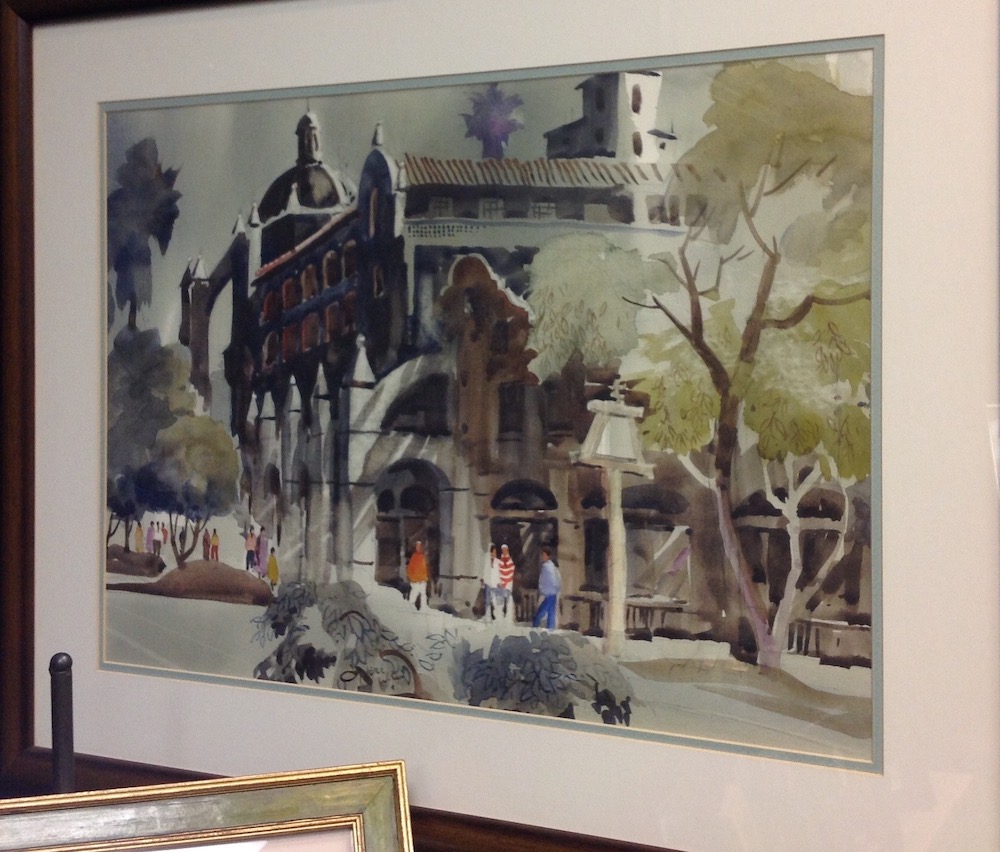 Mission Inn on the Mall. Painted at some point in the late 1970s or early 1980s.  Despite the Main Street mall changing numerous times over the decades this view still remains timeless and iconic.  SOLD!! 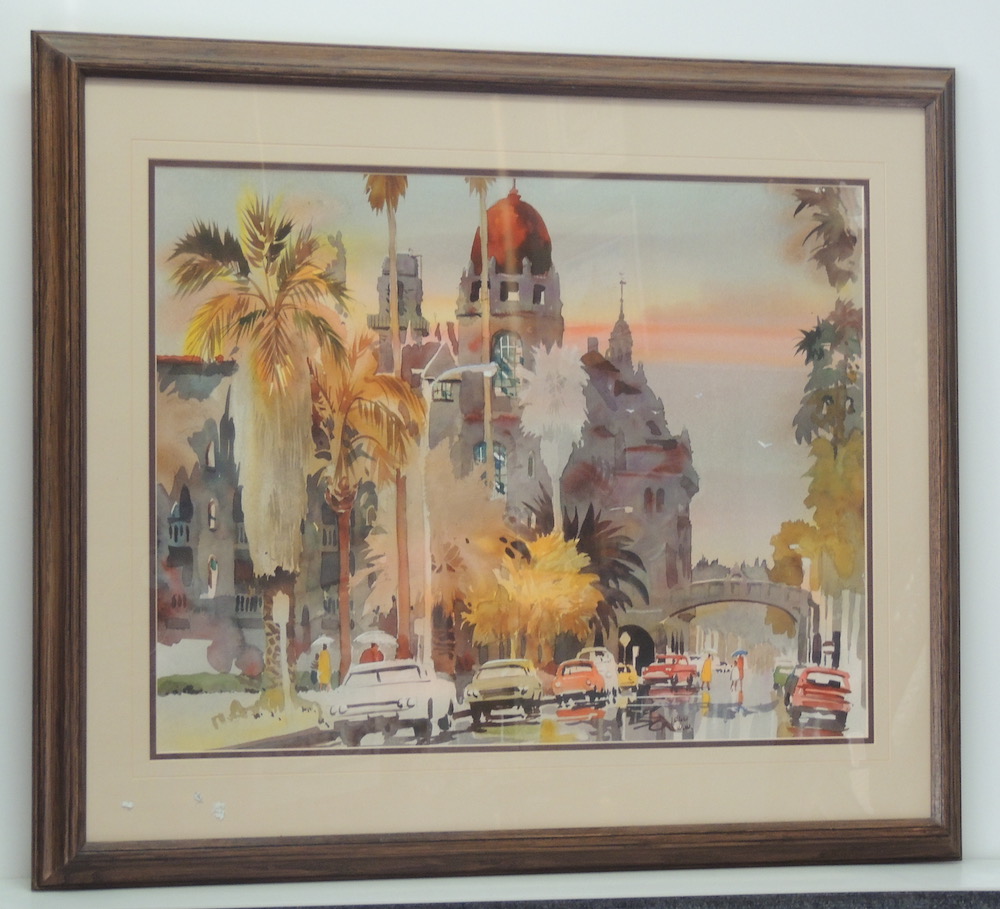 Mission Inn in the Rain.  This piece is currently the jewel of the selection we have for sale.  Don painted several versions of this one painting and we feel that this particular piece is a very strong example of the series.  SOLD. 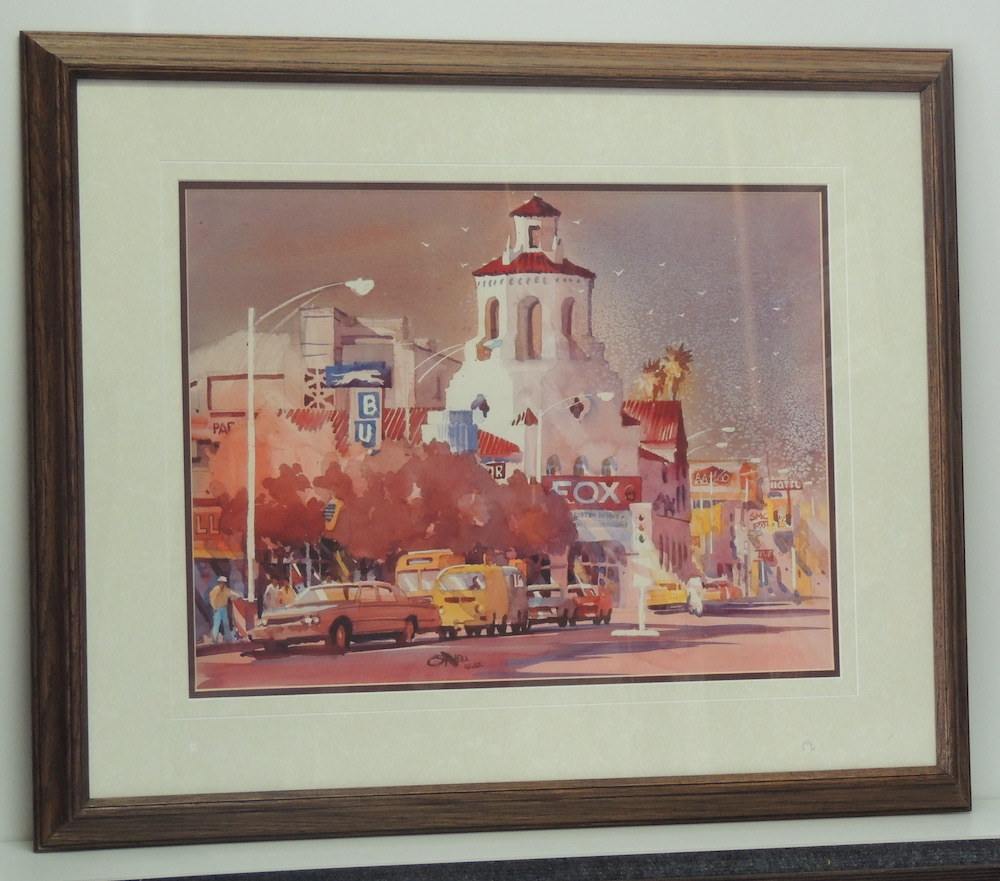 Sunset at the Fox Theater.  Another fairly unique look at Riverside of yesteryear.  This painting would have been painted at some point in the early 1980s.  SOLD